Isabelle: Age four. Loves to help me do everything. Cook, laundry, take care of Lincoln. The other day things were too quiet, and I found them in her room. She had made Lincoln a pretend bed on the floor and was reading him stories. Every morning she is the first one up- she comes and says hello, uses our bathroom, and snuggles in bed with us. She loves to be the first one into Lincoln’s room too- to wish him good morning. She loves apple juice, pancakes, meatballs, any sort of treat, and Grandma’s toast.

She loves to play outside. She loves to play pretend, like “doctor” or “pack for disneyland” or “baby sitting” or “sleepover.” She doesn’t like her hair combed but hates it in her face. She loves the Frozen soundtrack and seriously has most of the songs memorized. She just moved into CTR four class at church and her teacher moved with her which I am SO GLAD about because she is a wonderful teacher. Isabelle is very steady with her hands- she loves to “fraft” with pencils and paper, scissors, glue, anything. She loves to help me bake. She reminds me to give the kids their vitamins and makes sure we alternate who goes first everyday. She notices small details- things that I would miss, things I assume a four year old would skip right over– she notices. She often says stuff like “oh this is just a beautiful day!” or “That silly moon is still awake. Go to bed, moon!” She asks a lot of questions about everything- how cars work or where the baby will sleep and has graciously offered up her room to share. Oh I’m so tickled she will have a sister.

Just had her well check, 40 pounds and almost 41 inches. Tall. Favorite books are the Olivia Series and anything about any of the princesses.

Lincoln:  Age two. Talking a whole bunch. Stringing words together like “No mama no bite” when I am nibbling him. Loves his mama, still loves for me to hold him on his hip. Will scream/cry/throw a fit to realllllly try to get what he wants. He is very opinionated and specific. I’ve usually played his game so I know what he wants, but an outsider would have no idea that he likes to run around in his diaper for ten minutes after his bath or that his word for “ice water” is totally unintelligible. He has to be a part of the pack- he thinks he is big. He can run fast, climb tall things, get into trouble before I even turn around. He loves to dance and loves music- knows some words to the Frozen soundtrack (that has been playing on repeat. seriously.) He loves nursery at church. He can identify anything blue. Just blue though… He loves cheerios, yogurt, peanut butter jelly sandwiches, and of course french fries. Things I feed him one day he totally spits out the next day. So weird. He likes to climb into the car and into his carseat by himself- if I even assist he totally loses it. All. By. Himself. Favorite books: Brown Bear and Red Truck.

Linc loves to be outside. Go go go GOOOOO he says. He does not like to go to sleep anywhere but his own bed. He seriously loves his bed and can’t wait to get in it. (a total change from our first born) Still loves loves loves having his paci when he sleeps, and he loves to lay on soft things. His favorite show is Mickey Mouse. He loves to play cars and trains, and he loves to snatch any toy that any one else has. Especially if he has no idea what it is, he wants it. This kid is busy, and is hitting that beloved age “two” that everyone talks about. Major, major tantrums. I think a lot of it is because he is frustrated he can’t talk to me the way he wants to. But ohhhh he is so sweet, and so soft, and he loves me so much that it melts me into butter. He was pretty sick a few weeks ago and let me rock him to sleep, something he hasn’t done in a year? I don’t know, a long time. He feels so big in my arms, but his face looks the same. Baby Linc. Newborn softie skin baby face Lincoln. With fluffy hair.

Some days are really…challenging. I struggle with balancing kid time with personal time and housewife time and making sure the house is picked up and the laundry is done. A messy house really bothers me. Lincoln needs a lot of attention since he is still such a baby and I worry that I’m not giving Isabelle enough of my time. I try to have some one on one with her when Lincoln is napping but sometimes I’m just tired and pregnant and I just want to take a nap too, ya know? Some days are like golden rays of sunshine… when we all get along, things get done, we get out of the house appropriately dressed and on time, we are well behaved, etc. Those days are magical and make me want to have a million adorable soft skinned children so I can live my life raising babies. I’m so thankful for my two kids even on our grumpy days.

Couple more months and I’ll have a third child to update about and that makes my mind explode.

being cute/family picture, including a “baby in my tum”

out of juice for a few days, Lincoln wouldn’t let them go/ eye exam at the doctors

sometimes they hold hands and I die 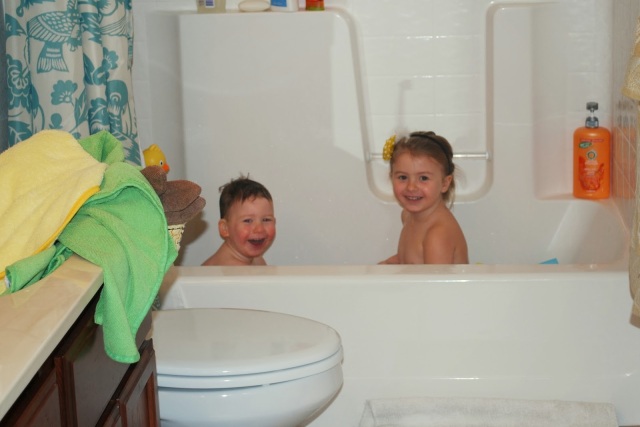