Tuesday we were lucky enough to tag along with Madilyn’s preschool and go to Hawe’s farm for a morning at the pumpkin patch. Regularly $12.50 per person, we got in for just $5 which included a medium sized pumpkin. SCORE. It was gorgeous weather (a tad muddy) and we all had a great time.

What is cuter than these three little girls holding hands. Isabelle doesn’t even want to hold my hand crossing the street but ANYTHING Madilyn does, she wants to do.

This one makes me die a little. Isabelle was just so thrilled to be there with all the other kids.

They had all of these activities set up for us to do- including feeding goats. I thought Isabelle would be like “no thanks” but once she saw what was happening she wanted IN on the action.

We took a wagon ride over to the pumpkin patch area to pick our medium sized pumpkins.

She found a couple she liked…

And then yelled, “MAMA. HELLLLP!” when she wanted me to pick them for her.

I love Madilyn in this picture. She was less than pleased to have Kira on her lap.

Wagon ride, post pumpkin picking. Isabelle: not to certain about it. 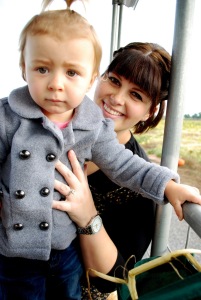 Isabelle, show me your teeth!

We also watched some pigs race, played on a big playground, and jumped in this giant corn pit. 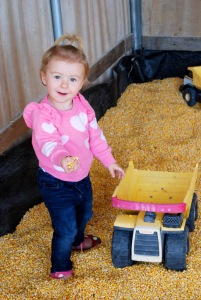 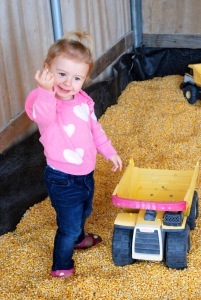 After a couple of hours, it was time for lunch and a nap (for both of us.)

I can’t imagine Isabelle being old enough for preschool but before I know it, the time will be here. Today I took her to her 2 year well check where she weighed in at 29 1/2 pounds and measured 35 inches tall- 80% for her weight and 90-95% for her height. She’s big! Like big enough for my doctor to be all like “we can probably cool it on the whole milk now.” In four months, she grew 1 1/2 inches and put on almost 5 pounds. See Jazz, I told you she needed new clothes.