I mentioned that last Saturday we threw a bridal shower for my sister, Sabrina. Now here is all the fantastic proof you were all looking for! The theme was “April Showers Bring May Flowers,” mostly because the shower was in April and Sabrina’s wedding is in May. See what we did there? Since it was sort of earlyish (10 am) we did brunch food. And by brunch food I mean cupcakes and whipped cream.

After reviewing my pictures, I have decided to reward myself with a C for documentation. I failed to snap photos of the most time consuming adorable invitations ever, also the outside banner/balloon configuration, and some close up of the finder details of the party. Maybe more like a C minus.

Also, if you are allergic to pictures, stop here. HEY SABRINA here are the photos I promised! 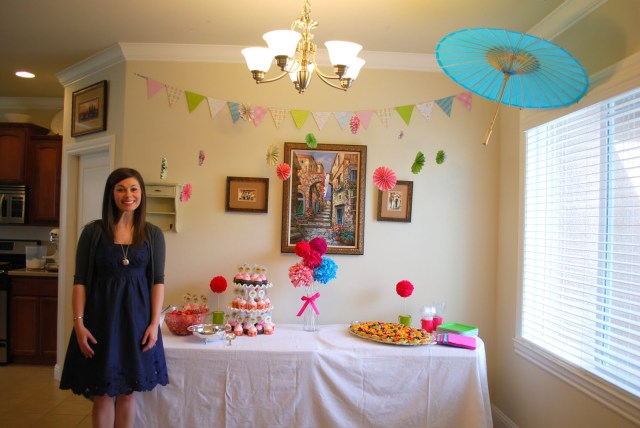 Here is our lovely bride-to-be and the spread of goodies (minus a ones that were still warming). Morgan was in charge of all things edible and she whipped up some amazing things. Custard and jam fruit tarts, tomato basil bruschetta with fresh mozzarella, mixed greens with gorgonzola, candied walnuts, and asian pears, fresh crepes with strawberries, nutella, and home made whipped cream, vanilla and chocolate cupcakes with buttercream frosting.

Are you drooling yet?

These were our favors.. homemade strawberry freezer jam. We made ten batches for the occasion- ten! (My sister in law is so awesome..) We stamped out coordinating scrapbook paper for the top of the jars, and wrapped them with die cuts from the invitations. The cute little green thank you tags were found pre-made at Michaels.

All of the banners in the house were made from scrapbook paper and ribbon… I made some new pom balls for the table and did the two topiaries on either side in tea candle jars. JaNae did the double sided hanging circle fans, again from the same paper.

I know this is blurry but I don’t care. 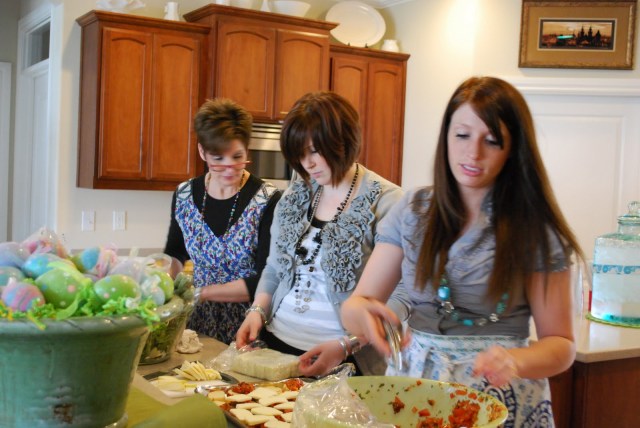 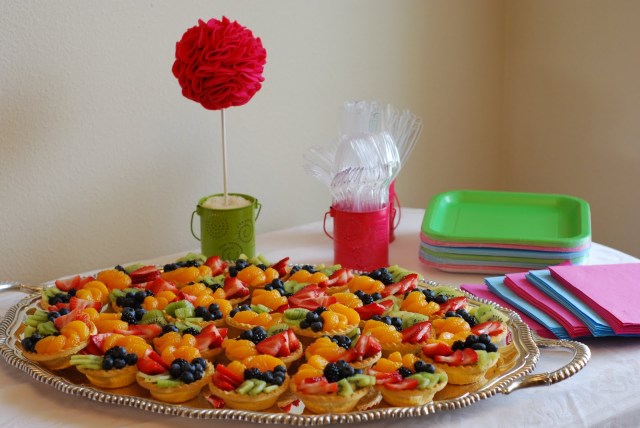 JaNae, where are you?

This is Whitney.  She helped throw the shower as well- she and Sabrina have been best friends since we were all little. Whitney said it best, their relationship is the perfect example of “opposites attract.” 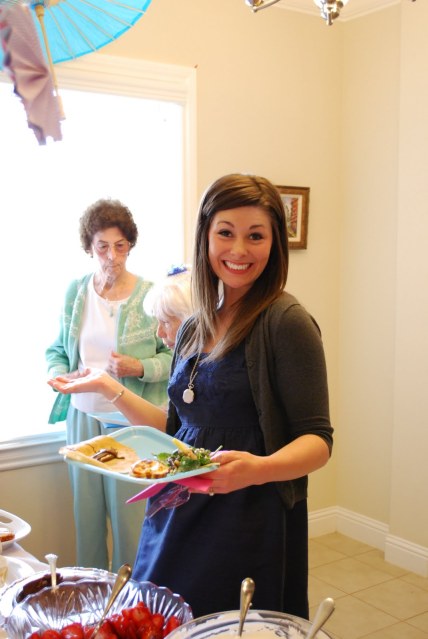 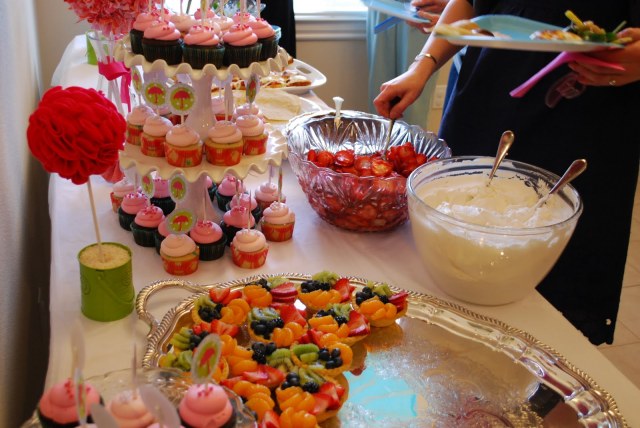 I think she made out like a bandit! Her kitchen will be well equipped with four hundred spatulas and twelve sets of measuring cups. We did a picture wall just like at Isabelle’s birthday, just swapped out the ribbons. There were some classic pictures hanging…Sabs, I will spare you. 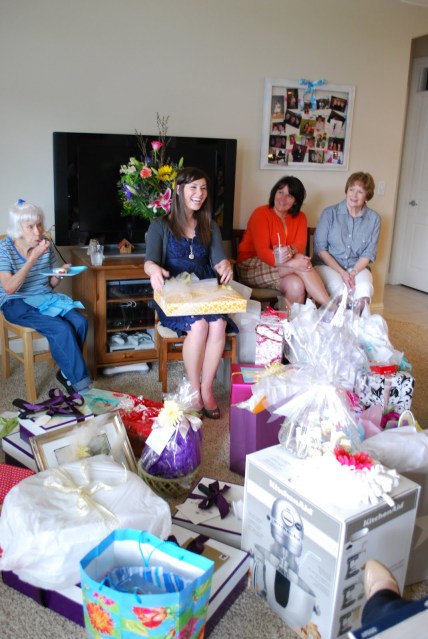 It was so nice to see how many people love and support Sabrina. She really deserves just the most wonderful life and this was a nice little send off into marriage. Although, I felt a bit… abused. As we went around the room introducing ourselves, a few people said stuff like, “Oh yeah, I knew Micci first and we all know shes kind of, well you know. And then Sabrina came along, and she is wonderful” or “Micci was the loud/obnoxious/loud/aggressive one and Sabrina was just peaceful and sweet and.. wonderful” or “After the trouble Micci caused, I didn’t know if I could handle another one but then I met Sabrina… and she was so loving and kind and wonderful.” Thanks everyone, I appreciate that.

What you can’t see (and what I failed to photograph) are the hanging origami swans from the windows. JaNae learned how to perfectly fold about 30 of those suckers, and then we had questions written on them about Jared that Sabrina had to answer as she was opening gifts. The tie with origami is that Jared used it as a flirtation method when he was trying to ask Sabrina out. He would make her little shapes and leave them for her to find. Isn’t that cute? Anyway, they look so springy in my living room, I haven’t taken them down yet.

And this is a classic, classic Zeus face.

These were part of my gift… I did seasonal holiday decor for her new apartment with her new husband. Presenting, Miss February and Miss December. 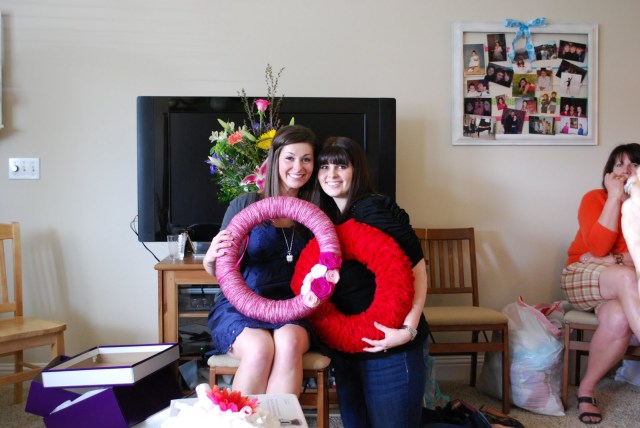 And our dear neighbors, the Parrs 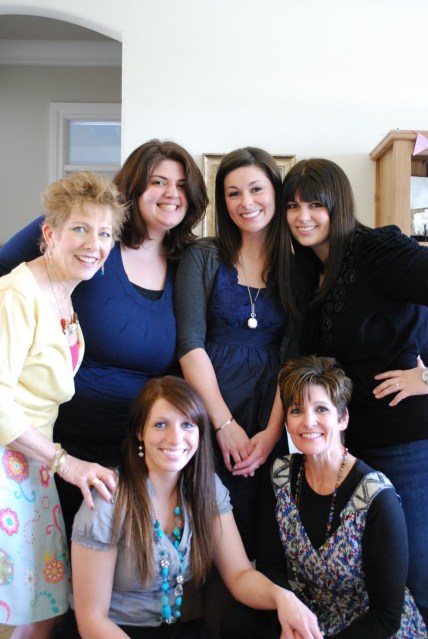 And here are the lovebirds..complete with Sabrina’s giant bow bouquet. 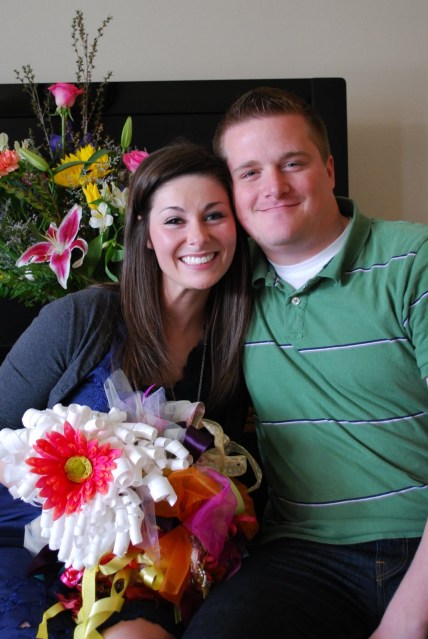 Thanks again to everyone who came and brought such wonderful gifts for Sabrina and Jared, I’m sure thank you notes will be heading your direction soon. If not, don’t blame me because reamember, Sabrina’s the “nice” one. Just teasing. 70/30.