We took 275 pictures on our trip and I am going to post EVERY SINGLE ONE OF THEM. Just kidding. Only about half.

Isabelle on the plane in her cute tiny sweater. Don’t worry I will have a completely separate blog for the traveling portion of our trip because it was an ADVENTURE.

Bright and early on day one, Jazz was thrilled that we got to finally partake of the celestial Dunkin’ Donuts. You can see Isabelle looks equally as excited. I think I ate more donuts on this trip than I have in the last year or so, which is saying a lot.

Here we are in the famous town of Hershey, the cradle of chocolate life. We went on a little ride to learn how milk chocolate is made, complete with singing cows and piped in chocolate aroma. I licked the air. Don’t judge me.

We also went on a trolley tour all around the city to see different things that Mr. Hershey built, like the Milton Hershey School. I feel so sad that he and his wife couldn’t have kids- but as a result they built this giant school for orphans and underprivileged children. It’s pretty incredible what this guy accomplished while he was alive, and how much freaking money he left when he died. 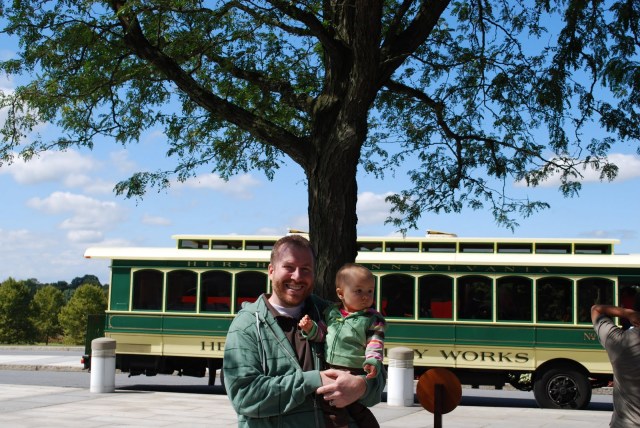 See, an actually trolley. Also, I did not realize how much Isabelle looks like a boy when she’s wearing brown pants and a green sweater. Her shirt was pink though, I swear.﻿

See, it’s totally hot pink. Isabelle is now walking with assistance everywhere, mostly one handed help. She walked so much on this trip, two pairs of shoes had to go in the garbage when we got home. She literally wore them out.
After we spent a few hours at Hershey and looked at all of their chocolate novelties, we drove back up to Danville while Isabelle had a good nap. Later, we threw her in the baby bjorn and went to walk the city. The weather was beautiful, just a little chilly, clear skies- perfect for a stroll. 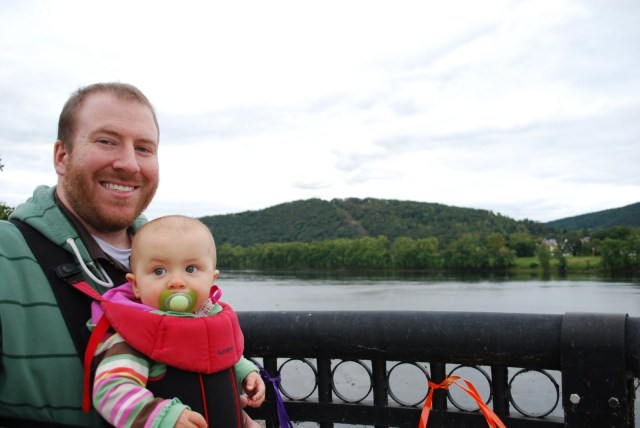 Jazz grew up in Danville, which is right next to this bridge that crosses over the Susquehanna River into the larger city of Riverside. The bridge was so beautiful and gave us a great view of the area. The trees are just barely starting to turn colors- I had never seen so many rolling green hills in my life.  Hey look, Isabelle caught taking her paci. It was like, “quick, take a picture.” 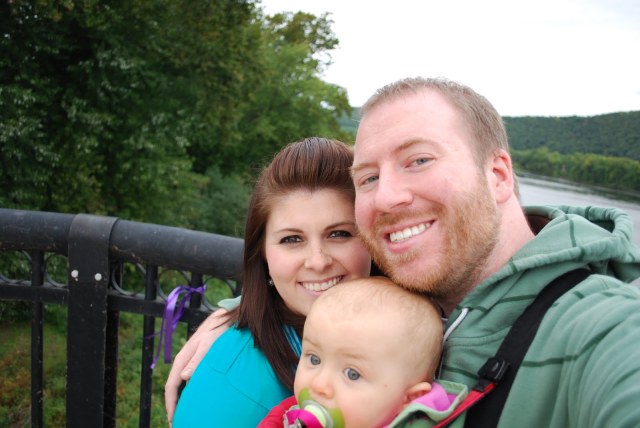 Once you cross the bridge, you are right in the middle of this darling historical town. Everything was so Victorian and cute I just had to take pictures.

There were so many cool antique stores and giant barns with consignment signs on them, my little heart was just leaping. However, I figured it would be hard to get a china cupboard or a vintage toy box home via airplane. We did pop into one store and volunteered Isabelle to try on this hat. She loved it, as you can see. The store was closing and we meant to go back before our trip ended and we didn’t make it, otherwise this hat would have come home with us.

This area was settled originally for coal, in fact it is home of the first Iron T Rail in America. This is my “this monument is kind of random on the side of the road” face. We walked around the city, then headed back across the bridge for a delicious fondue dinner. 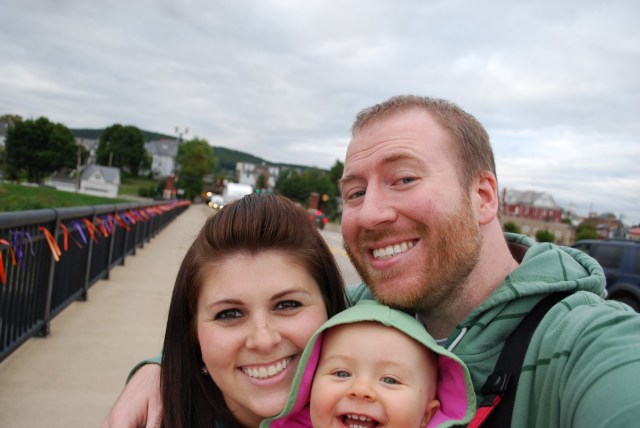 I love this picture (even though we aren’t quite centered) because you can see all of Izzie’s little teeth. Shark! 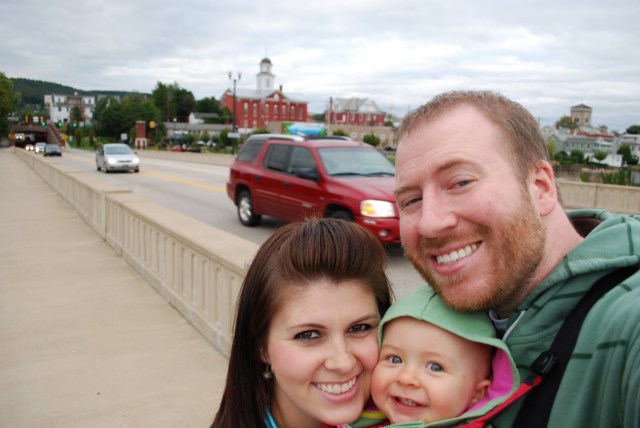 5 thoughts on “Penn Trip Part One”