I’m pretty behind on life right now, including keeping up on my blog. I still haven’t finished posting about our hospital stay with Thatcher, and he is six weeks already! (Edit, now seven.) Turns out I have a lot less free time these days… this kid loves to eat. And eat. And eat. And pretty much that’s all I do. Jazz leaves, I’m nursing. Jazz calls, I’m nursing. Jazz comes home, I’m nursing. I’m totally fine with that- he is almost up to twelve pounds! His little legs are getting nice and chubby. Oh you guys he’s so cute I can hardly stand it.

Anyway, another photo heavy post coming your way. Here’s the follow up to Thatcher’s birth story. We spent three and half days in the hospital- me recovering from major surgery, and him learning how to eat and be adorable. I mentioned that he had to stay overnight in the nicu for breathing issues, so eight hours after my c-section I got in a chair with my bag of pee and was wheeled down to see him. We scrubbed in and went right over to his little bassinet. Jazz showed me where Max was when he died since I had never been in there. It was kind of nice to be where he was.

Poor little guy, he had some oxygen in his nose- just pressure to help his lungs open up. He had an IV for tpn fluids in his hand and it was so sad! I got to sit and hold him for awhile until I couldn’t sit up anymore, and then we went back to bed. His hairline here looks so much like Isabelle’s. That little widow’s peak! His perfectly round head!

That night we slept as much as we could- people coming in to check vitals and give me medicine- and me pumping every few hours. Nurses were SO GOOD TO US. I just can’t stress that enough. We were given the largest room with the best view- Jazz got a bed which was such a blessing as he wanted to stay with me as much as he could. We had some visitors and lots of our hospital friends stopped by to say hello. Early the next morning we went back to the nicu to visit Thatch- he was off of oxygen and just waiting to get the all clear to come to our room. So sleepy, so mushy, so delicious. A few hours later I was napping and Jazz came into my room with a surprise- wheeling in our baby! YAY! After that it was such smooth sailing. Thatcher latched and started nursing so well! Was a bit of a challenge to keep him awake. It’s so hard to be born and then stay awake for all of the festivities. 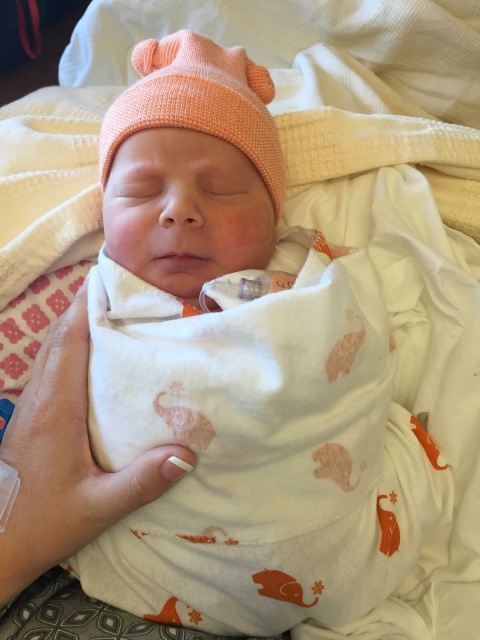 Mom and dad brought the kids to visit as they hadn’t been to see the baby yet. I was so excited when I heard them down the hall! 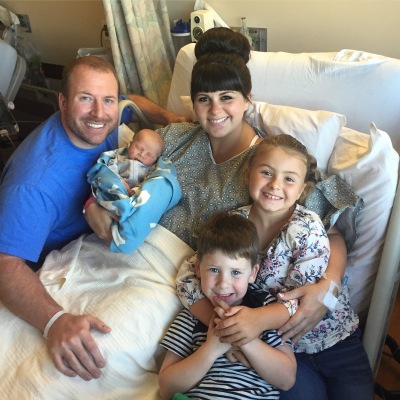 The kids were so cute. Isabelle was VERY excited. Lincoln wanted to explore the room and play with the remote to my bed. And snacks. Where are the snacks, mom? Also props to my parents for handling these guys for like five days. They have a LOT of energy (Lincoln) and get up early (Isabelle) and honestly the kids had the time of their lives. Coming back to our house was BORING after grandma’s house. 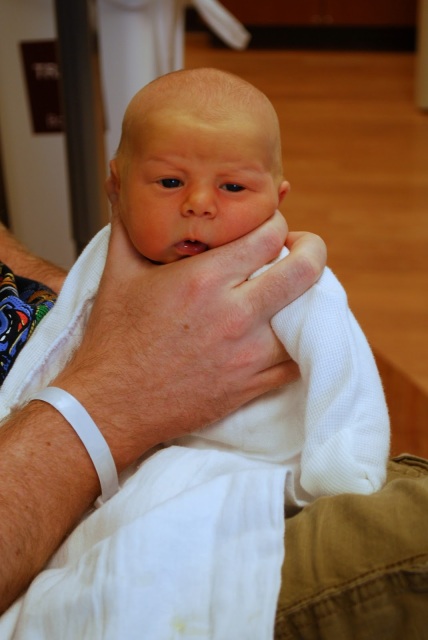 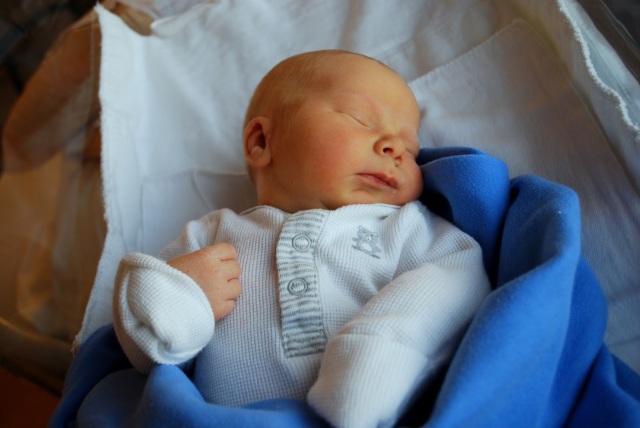 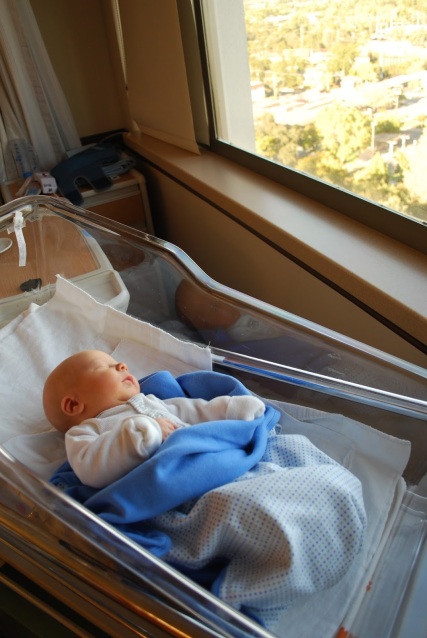 This guy. For putting on my socks. For bringing me food, keeping my water full. For gently waking me up when it was time to feed, for keeping me on top of my medicine. No truer form of love than service. Even now he does most of the bedtime routine for the big kids while I nurse from the couch- reading, baths, bed, etc. Really appreciate all he does for our family. Our four days in the hospital were like a mini-vacation for the two of us! There is nothing like those first few days, days and nights blend into one and you sort of just exist for each other. It’s my favorite. 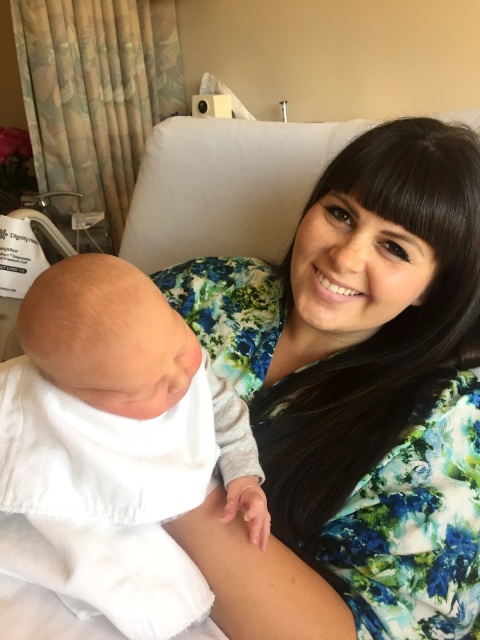 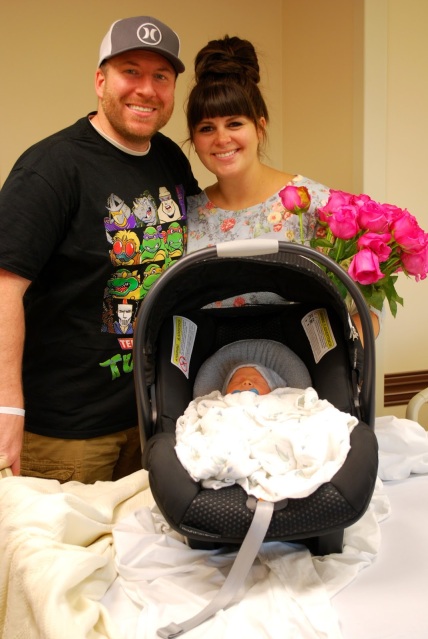 On Saturday, we finally got approval from the pediatrician to take Thatcher home. He lost more than 10 percent of his birth weight and that made them concerned, but I knew if we got home he would beef up no problem. The nurse came in with all of our discharge papers and as we were going through them I just started bawling. I just was SO HAPPY to be bringing a baby home, I never got to do that with Max, never got to sign papers or bring the carseat in from the car. It felt so good to strap him in and head down the hallway.
By the nurses station, there is this little bell. Every time a baby is born, you get to ring that bell and Brahm’s Lullaby plays throughout the entire hospital. When I stayed in the hospital after Max died, I kept hearing that lullaby play at all hours and it was just another reminder of what was not to be for us. I never got to ring that little bell for Maxwell. So this time we stopped at that desk on our way out- some of our nurse friends came out and we got to ring the bell. The lullaby played for Thatcher and for Max too and we just stood in the hall having a moment and hugging each other. So thankful. Sean played that song on his violin at Max’s funeral and it will just never be the same for me. We drove away from the hospital with our car loaded up and our hearts full- headed home with our new baby.