Thursday we carved pumpkins. I say “we” and “pumpkins” lightly because the stores were sold out of carvable pumpkins. I’ve had tons of small and medium pumpkins on my porch for weeks but neglected to pick up our carving ones until they were literally all gone. Great job, mom.

Jazz had long ago picked one out for seeds (he likes to roast them) and Isabelle had a small one from school. I carved a gourd you guys, a gourd. Lincoln wanted nothing to do with any of it and was perfectly happy to run around pants-less. Iz actually cried her face off when we forced her to touch the slimy guts. 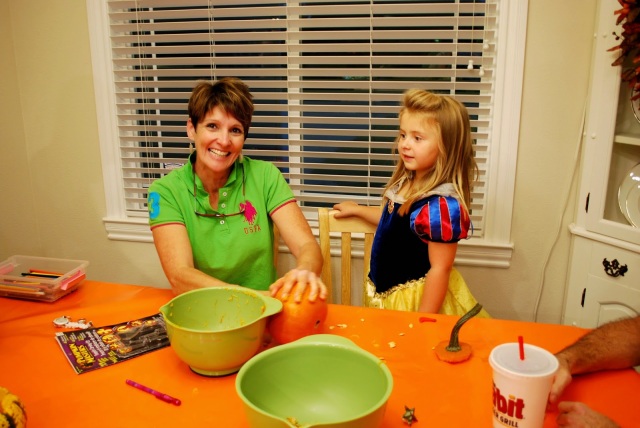 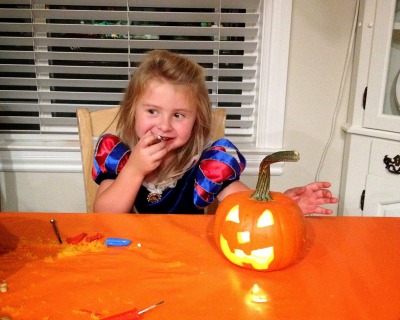 On Friday, the forecast said it was going to rain all of Halloween so it was such a relief when the clouds parted and the sky gave a temporary trick or treating break. Isabelle made a beautiful Elsa. Lincoln made… well let’s just say he had a late nap and I had to wake him up and it’s sort of like poking a sleeping giant. Once he started trick or treating he was fine, but the pictures were a NO GO. I’m glad I got a bunch of them in costume at Disneyland last month!

We went over to moms and of course, she nailed it again. This years creation was Maleficent and she was perfect. I love all the people that come by to see what she has dressed up as- she always does it right. Go big or go home, you know?
(I’m like mom how did you make those horns and she was like, “oh you know just shaped them with air dry clay then you paper mache them and then you know make another mold and stuff them and paint them and WRAP THEM IN LEATHER AND STUFF.” like it’s totally normal.) (“oh this staff was just an old stick… I used a bunch of hot glue on it to make it bumpy and then I hand painted it. and oh that’s a christmas ornament on top!”) 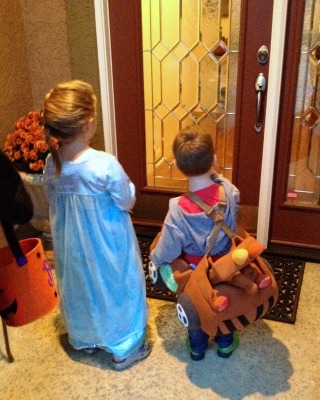 We had a really fun and sort of low key night- once around the neighborhood, some pizza, Room on the Broom and we called it good.
There is and probably always will be a small part of me that will spend every holiday wondering how things would be different had Maxwell stayed with us. I wonder what we would have dressed him up as? Maybe he did dress up, maybe they have Halloween in heaven and instead of candy you get sparkly celestial stars. Another little hurdle behind us.