I know the fourth is OLD NEWS but I’m just getting around to dumping my camera to my laptop. Whatever.

We made special muffins for breakfast. Blueberry. And Isabelle added red sprinkles to hers. Naturally.

Then we went to my parents’ for some swimming time and an impromptu barbecue. Mom always has the food. Like whoops these cookies accidentally baked themselves! Here have three. 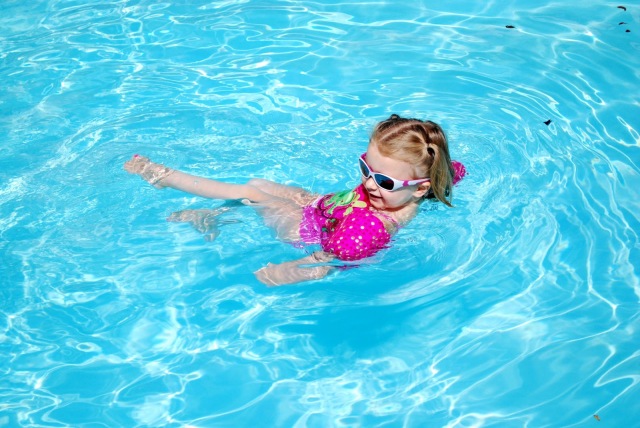 Later in the evening we had two fabulous guests for our very first cousin sleepover. Scott and JaNae moved into their new home that weekend- and so we had their girls over to play while they moved. Four kids under five, let’s do this! They were SO excited. Isabelle kept asking “is it time. is it time. is it time.” like a hundredy times that day. We watched a movie and ate popcorn, and the kids actually went to sleep. Well…yes, we separated them eventually but it was adorable listening to their little conversations and giggles.

The next day we had all sorts of fun things planned including decorating sugar cookies. Me and Iz baked them the day before so I just put frosting into baggies, taped the tops shut and let the girls have at it. Linc mostly just ate frosting.

And what is cousin playtime without some dress ups.

3/4 kids napped at the same time so I even got a shower. Winning. We had a super fun 24-hours and when I took the girls home- it was to their new house! All ready for them- Ta-da! I’m pretty sure having the girls sleep over was the best part of Isabelle’s whole life.

1 thought on “the fourth with four.”