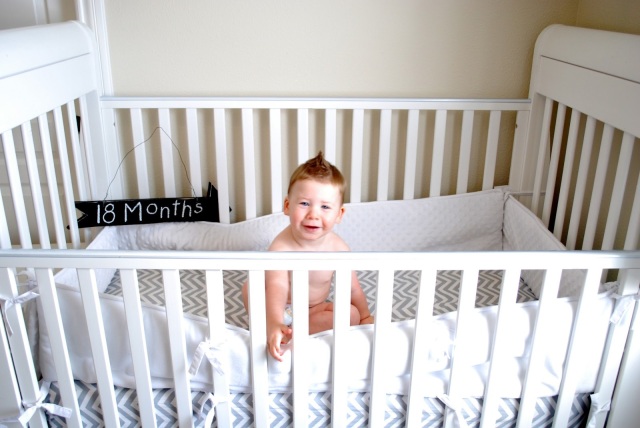 Lincoln is 18 months- a benchmark primarily celebrated by the admittance into the nursery at church. Hallelujah, amen.

I want to bite this kid’s face, all day long, everyday. Sometimes even at night. HE IS SO FUN AND CUTE. Nibbly, even. His giggly is so infectious, like an old man wheeze. He is stubborn and strong willed and more than anything he wants to be included with the big kids. Me too, begs his little face.This kid oozes personality- constantly smiling and talking and doing things. Busy, busy.  Lincoln is t-r-o-u-b-l-e. He is the stealer of toys, the giver of “love bops” on heads, and the sneaker of snacks. He looks at me with mischief written all over his face- he totally knows what he is doing and mostly does it to get a reaction. Isabelle hates it. Normally though, they play really well together and Isabelle talks to him just like I do. It’s so cute.

Lincoln is talking more! Mostly he mutters “mamama” all day. MamaaaaamamamamMAMAMAM. He also says YEAH, dad, bubble, bath, ball, car, book, nite nite, uh oh,.. really working on grandma and grandpa though. He is starting to do two-syllables together which is fun. If all else fails, he points and grunts like a caveman. UGH. He is working on his animal sounds, so far hes got lion and cat down pretty good. He sort of signs but only when I ask him, he is sort of past it though since he is starting to talk and I’d rather him speak than sign, ya know.

He weighs maybe 26 pounds? Size five diapers, 18-24 month clothes, size 4-5 shoe. His hair grows like a chia-pet- we have had it cut three times and still it gets so fluffy. He loves soft pillows or soft stuffed animals and he is OBSESSED with dogs. Whenever he sees a dog he totally loses his mind, he can not do anything until he touches the dog. MUST…PET.. I’d love a small dog someday, but maybe when our kids are bigger. No Jazz, a German Shepherd is not “small.”

A while ago we had to say good bye to the bottle. His life was over. He was just drinking tons and tons of milk and eating less food and really becoming attached. Plus he has some jankety front teeth so it was time. I had tried to “wean” him before but caved every time because of his sad little tear filled face. This time I put away all the bottles so he couldn’t see them and basically cut him off cold turkey. Took three days of his resistance but cmon Linc, no one is more stubborn than me. After a few days he forgot about it and he was fine. As a sign of baby rebellion though, he refuses milk in ANY cup, won’t drink it at all. None. Next to conquer will be his beloved paci…..yikes.

Lincoln loves peanut butter and jelly sandwiches, pancakes, honey not cheerios, yogurt, pretzels, mandarin oranges, and will seriously do backflips for fruit snacks. He eats a lot more now that he isn’t consuming 24+ ounces of milk a day. Even without his staple of milk, he is a solid sleeper- 11-12 hours at night with a good 2-3 hour nap during the day. Good boy.

Linc loves to do blocks, play with teeny cars, and read books. Mostly books about puppies, he bends down and kisses the puppys on the page. Adorable. He also LOVES to dance to any kind of music- it just consists of him turning in circles and running around crazy but he loves it. When he wants my attention (like when I’m cooking) he comes and rams his head between my knees until he breaks through and falls to the floor. More than anything he likes to be outside. He loves the pool, loves water, sprinklers, hose, bath- anything.

The other night we were reading books in the big chair in his room just before bed. He sat right in the nook of my lap and I looked over and saw his face scanning the pages, his little mouth furiously sucking on his paci, that little nom nom nom sound it makes with his puckered lips. His soft fluffy hair was still wet from his bath and he smelled like fresh baby skin. Heaven. This time is going too quickly. 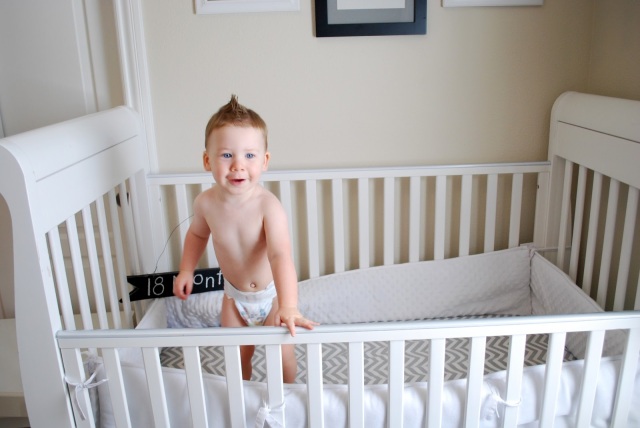 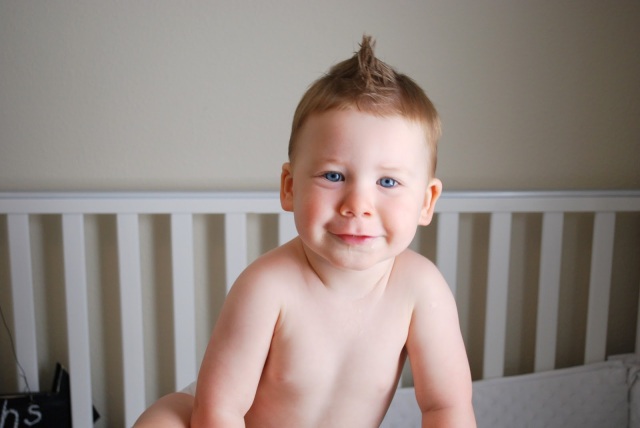