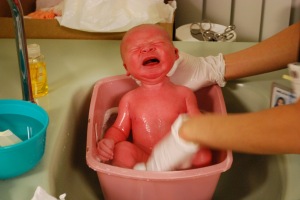 Jazz went with Lincoln while my guts were stuffed back into me and I was stitched up. The surgery took longer than my first one and I was dyiiiing for it to be over. For some reason my arms were killing me and I kept moving them over my head and accidentally ripping my leads off. I heard them call over that the baby was 7 pounds 9 ounces, 19 1/2 inches long, with APGARS of 2 and 9. The 2 is really horrible and I’m not sure what happened there but by five minutes he was pink and perfect. Jazz brought him over to me to look at and it was like I had known him forever. Probably because he looked like a little boy clone of newborn baby Isabelle. 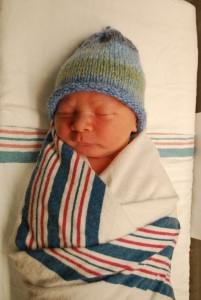 Jazz and I stayed in the recovery area with our new tiny baby for a few hours until I was cleared to go to my room. I ate ice chips and snuggled with little Lincoln and soaked up every moment of his froggy little body on my chest. He really showed signs of wanting to nurse so we hooked him up and I was shocked when he actually latched. I’ve said before how difficult feeding Isabelle was- I really had no idea that a baby could just come out and know what to do.

Soon I was wheeled into our room where we would be holed up for the next three days with baby Linc. Lucky for us, the hospital wasn’t very busy and we were given a double room so Jazz got a bed! He was thrilled. I’m sure those couch chairs just aren’t as comfy as they look. Actually, they look horrible so I was so thankful he had a bed. At this point, we were both exhauuuuuuusted. Labor was about 36 hours, plus the surgery, plus recovery, and it felt like we had been awake for light years. I know I looked awesome. We had a constant stream of people all day- pediatricians and doctors and birth certificate people so we really didn’t get to sleep until that way later that night. Because Davis is a teaching hospital, we had interns and residents as well as attendings come around to check stuff out. The entire staff was so wonderful the entire time we were there, we were so thankful for all of their help. I’m all for the teaching thing- it was a neat experience to be a part of rounds… I kept looking for Zach Braff to pop up but he didn’t.

About 11 am my mom brought Isabelle to meet her baby brother. She was SO cute and SO excited to see the baby out of my tummy. She needed to check that he had two ears and all his fingers and touch his soft little head. She was also so excited to see me which of course made me cry. I thought it would be painful to be away from her for so long, but somehow it was okay? Like I knew she was having the best time ever at my parents’ house, and what better reason to be apart then the birth of a new baby. Of course I thought about her and I missed her, but it didn’t hurt my soul like I thought it would. 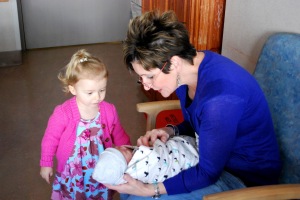 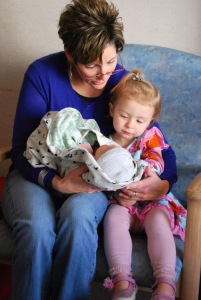 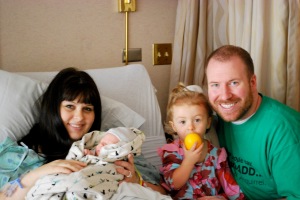 Mom took Isabelle back to Redding to stay with her while we were in the hospital, and finally late that night we got to sleep. Oh man, I love to sleep. Eventually they wanted me to get up and walk around and I said HECK NO I just had surgery! But they made me, so I got up and made it to the chair and then started to lose it. I blacked out after taking a shower after Isabelle’s birth (which made for an awkward naked rescue.) I had super low blood pressure the whole time I was in the hospital, so I got extra IV fluid and less pressure to get up for the first little while. Percocet was my BFF. Eventually I got to shower which was so heavenly.

(Real quick. Jazz was so, so tired but the second night he went to get mac and cheese from noodles and co for us. When he was picking up the food, the employee asked him, “Do you want silverware?” And Jazz, in his dazed and exhausted state, misunderstood and replied, “What is self aware?” Bless him. It still makes me giggle.) 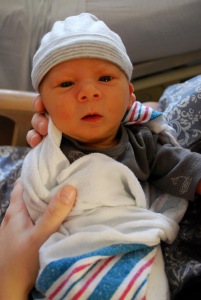 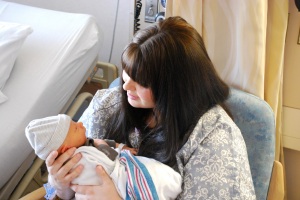 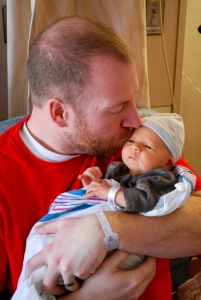 Lots of people told me that their second c-section was easier to recover from than their first. In my opinion, the first few days are equally as painful. Getting out of bed without a crane is sort of agony, and once they take out your catheter you are BEGGING for it to go back in so you don’t have to make bathroom trips. After the first few days, I was much more mobile compared to the first time. I could walk around and sit up easier and by the time we came home I felt so much better. I even slept on my side the second night home which I didn’t do for weeks the first time around. 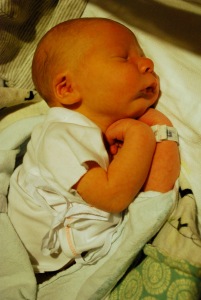 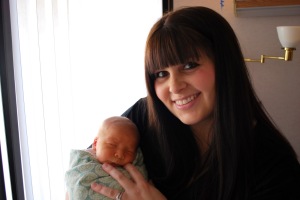 And now the four of us are home together, adjusting to our new little life. I can’t believe how easy it was to love another baby like I love Isabelle. So far he is so mellow and mostly just eats and sleeps, rinse and repeat. He is so soft and he smells so good and he has one wrinkly little ear that flops over just a little bit. His legs are so skinny and he has these tiny elephant wrinkles on his knees. He is a fantastic eater and as a result, sleeps pretty good too! I know he is only ten days old and this is likely to change at some point but it’s just a different experience than we had with Izzie. When he is all curled up on my shoulder after he nurses I feel so blessed and so happy with my life.

Some people have told me they are sorry that the vbac attempt wasn’t successful. Of course, I would have loved to not have surgery but in no way do I think it wasn’t successful. I will forever cherish those two weeks with Isabelle in Sacramento on our “adventure” as long as I live. I now know what it feels like to go into labor, to call my husband and tell him it is time. I got to drive to the hospital in the middle of the night while experiencing contractions. I worked hard and long and got really, really far. I know that I exhausted every possible option before consenting to surgery, and in the end I got a (super cute) healthy and happy baby.

Total success. Would I do it again? 100 times over. Again and again and again, it was such an amazing experience.