Lincoln is hard to feed. He wants to do it himself. BUT he only wants to eat certain things, and it changes every day. I swear the floor under his hair chair is the cleanest place in the house because I clean it all. day. long. If I give him something he doesn’t like, it goes on the floor. If I give him something in the wrong order, it goes on the floor. If I’m not giving him enough attention, food on the floor. If he is finished, food on the floor. He is weird about the texture of food that goes in his mouth- like he won’t eat noodles! or sandwiches! or cereal! I spend most of my life thinking about what to feed him, and the other part of my life cleaning up my failed attempts. He is over and done with spoon feeding- occasionally if he is distracted I can get some applesauce/yogurt/oatmeal/soup into him (seriously I have bribed Isabelle to ride her bike around the kitchen to keep his attention.)

ANYWAY. We went to the Burrito tonight and of course Lincoln spit everything out and threw everything on the floor. (Weird, because last week he ate like half a burrito bowl no problem.) When we got home, I got ready to give them a bath and out of the blue, Isabelle asked for a snack of cheerios in the tub.

I sat and gave Isabelle bites of cereal while they both splashed around in the tub, and as soon as Linc saw Isabelle eating,  he wanted some. I have tried to feed him cheerios and milk like four thousand times but not until tonight did he actually chew them and swallow them. (of courseeee.)

I sat and spoon fed my babies like little birds while they played and splashed around the tub. My mind went back a year ago, exactly, when I was spoon feeding Isabelle cheerios in the tub in Sacramento. Every morning while we were waiting for labor, she would get in the bath and I would feed her cheerios. She was two. She was just talking in chunky sentences and putting her shoes on by herself. Her hair was fluffy and she could barely get it in ponytails.

I was huge. I was swollen and round and ripe and so ready to meet my sweet new baby. I waited, and walked, and waited some more.

That little baby that kept me waiting so long last year is big now. He stands up in the bath. He crawls over his sister to get his toys.  I can’t believe that in exactly one year I am back again, feeding cheerios to my baby in the tub. 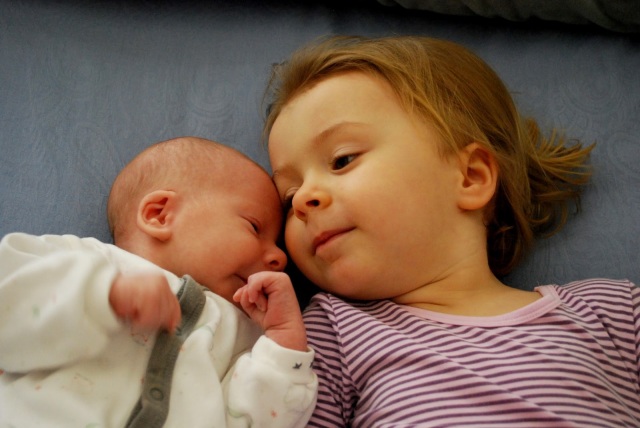 3 thoughts on “babies and baths.”